Colorectal cancer: risk increases with every year of being overweight

Excess body fat promotes colon cancer. It sends out inflammatory messengers and growth factors that drive colon and other tumours to proliferate. But not only the current weight is decisive: “Our consideration was that the length of time a person carries the excess kilos around with them should play an even greater role in determining the risk of colon cancer,” explains Hermann Brenner, an epidemiologist at the German Cancer Research Centre. 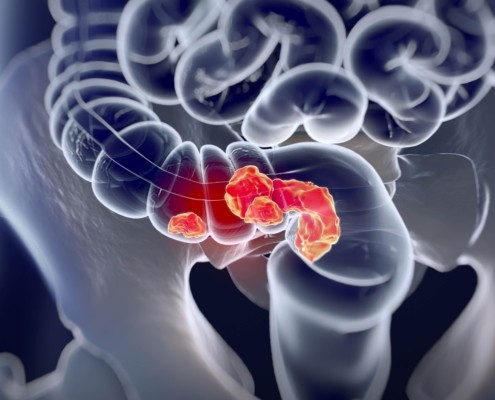 However, previous studies have often only asked for the body mass index (BMI) of the groups examined at a single point in time. The studies did not record the length of time people were overweight.

Scientists also apply a concept of “cumulative lifetime exposure” to other risk assessments. In order to determine the harmful influence of cigarettes, for example, one not only asks about current consumption, but also determines the “pack years” smoked over a lifetime.

In order to investigate their hypothesis, the scientist and his team compared data from almost 10,000 people with and without colorectal cancer that were collected as part of the so-called DACHS study.

The participants provided information about their weight at various times from the age of 20 years. In this way, the researchers were able to determine the number of years of life with overweight for each participant.

The result: the risk of colon cancer does not only increase with the degree of obesity, but also with the overweight years of life. Compared to people who have maintained a normal weight all their lives, those who are permanently overweight are up to two and a half times more likely to develop colorectal cancer.

This means that being overweight has a higher predictive power and correlates much more strongly with the actual risk of colorectal cancer than a one-time weight determination would suggest.

“Our study makes it clear that obesity has an even greater influence on the risk of colon cancer than previously assumed,” says Brenner.

The researchers suspect that this also applies to many other diseases for which obesity is a known risk factor. In addition to tumour diseases such as breast, uterine, kidney and oesophagus cancer, these also include type 2 diabetes and cardiovascular diseases.

“This underline once again how important it is to prevent obesity from developing in childhood and adolescence,” emphasizes the epidemiologist.

All HanseMerkur are available with cover for annual colorectal cancer screenings, along with other screenings for all the other most prevalent cancers. Moreover, as mandated by law, all residents of Dubai are entitled for free annual colorectal screening, which must be covered by default on any Dubai Health Authority (DHA) compliant insurance policy and consequently paid for by the health insurance companies.