Corona mutation: how dangerous is the new variant?

A new variant of the Sars-CoV-2 coronavirus is spreading rapidly in the UK and has even reported to be on the rise in other countries that had previously seemed to have the virus under control. Due to mutations, it is said to be significantly more contagious than previously known variants and now numerous countries are stopping travel to and from the UK.

The new type of coronavirus was discovered in the UK, where it has been spreading in leaps and bounds for four weeks, especially in the south-east of England. The UK Minister of Health reports that it has already caused over 1,000 cases.

Researchers refer to the new variant of the virus that has preoccupied the world for a year as the B 1.1.7 line. The English health authority speaks of VUI-202012/01 – a variant under investigation. 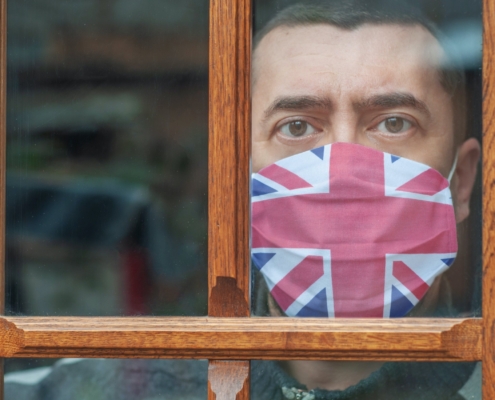 It is not yet possible to say whether the new Corona variant is more dangerous than previous ones. The English public health authority (Public Health England) stated in a press release that there is so far no evidence that the mutant causes more severe disease. No more fatal infections have been observed.

Scientists in the UK have already published a preliminary characterisation of the genetic makeup of the new coronavirus mutant. Accordingly, the B 1.1.7 line with 17 mutations has a noticeably high number of genetic changes. The mutations of this coronavirus would particularly affect the spike protein. This protein sits on the surface of Sars-CoV-2 and is used to ensure that the virus docks on the body cells.

Here, the researchers highlight a mutation called N501Y. It affects the binding site of the spike protein. According to the paper, the mutation could cause Sars-CoV-2 to bind better to the ACE2 receptors. These recipient structures are located on the surfaces of the human body cells and represent the entry point for the virus.

How contagious is the new Corona variant?

The mutations would make this type of virus 70 percent more contagious, UK Prime Minister Boris Johnson told journalists. According to the top scientific government advisor Patrick Vallance, it already accounts for 60 percent of all corona cases in London, as reported by several media sources.

Whether and to what extent the new variant is actually much more contagious will only become clear in the coming weeks. The English health authority also emphasised the high number of people who have been infected with the mutated variant. However, there are many new infections in these regions.

Christian Drosten, head of virology at the Berlin Charité, also points out this fact in an interview with Deutschlandfunk. Accordingly, the question is whether the virus is being “flushed up” by a wave of infections that is already emerging there or whether the new Corona variant itself caused this wave.

In the interview, he also agrees with the 70 percent mentioned by Boris Johnson, by which the mutant is said to be more infectious than previously known Sars-CoV-2 types. According to the virologist, it is an estimate whose scientific basis is not necessarily secured. It is not clear whether the virus in particular is spreading rapidly or whether other factors have not contributed to the increase in cases with the new variant. The less stringent measures could also explain the increase.

Do the vaccinations work against the new corona mutation?

According to the English health authority, there is currently no evidence that the corona vaccines are ineffective with regard to the mutated variant.

The concern that vaccines that have already been developed will not work against the new form is due to the altered spike surface protein. This also applies to the vaccine developed by BioNTech and Pfizer. Mutations in this area could therefore affect the effectiveness of the vaccination.

A news article in the British Medical Journal quotes Sharon Peacock, director of a British consortium that deals with research into the virus genome (Covid-19 Genomics UK Consortium, COG-UK). According to her, there is no evidence that the new Corona variant evades vaccination or immune response. In the event of vaccination failure or re-infection after vaccination, however, such a case must be treated with the highest priority.

Andreas Bergthaler, microbiologist at the Austrian Academy of Sciences, also points out that the defence system develops different antibodies against the spike protein. In an interview he gave about the Sars-CoV-2 mutations in mink, he emphasised that a single mutation does not necessarily affect the effectiveness of the vaccine.

Virologist Drosten sees it similarly. He “doesn’t at all” believe that the effectiveness of the vaccination suffers from the mutations found. It is true that individual antibodies that arise after a vaccination could no longer attach to a specific point on the spike protein. However, one has a “mixture of antibodies in response to the vaccine”, which are directed against different substructures of the surface protein. He also refers to the effect of the T cells. According to previous vaccination studies, these special defence cells of the immune system are also activated by a vaccination. This means there is another effective mechanism that can protect against Covid-19 after a vaccination.

The mutation has not yet been detected in Germany, according to Federal Health Minister Jens Spahn (CDU) in an ARD interview (“Report from Berlin” on Sunday). “Not seen in Germany so far,” writes virologist Christian Drosten on his Twitter account on Sunday. In the Deutschlandfunk interview on Monday morning, however, he suspected that the virus “is already in Germany”, especially since the new Corona variant was first discovered at the end of September.

Ultimately, it cannot be ruled out that there are also individual undiscovered cases in this country. The measures currently being taken should at least prevent more cases from being registered in Germany.

In any case, the virus will probably not be kept away in the long term. Because the virus is already circulating among neighbours. According to the WHO, the new variant has already been identified in the Netherlands, Denmark and Australia in addition to Great Britain. The corona mutant was also found in a patient in Italy, reports tagesschau.de, among other things, and refers to the Italian Ministry of Health.

Even without a previously proven German case of the new Corona variant, the federal government takes the reports from Great Britain very seriously, said Spahn in an ARD interview. There is an intensive exchange at all levels, including with European colleagues. The Robert Koch Institute is also involved.

While the United Arab Emirates (UAE) discovered a “limited number” of cases of people infected with a new variant, a government official stated. He said those affected had travelled from abroad, without specifying from where or the number of cases.

Are the mutations surprising?

Changes in the genetic material are not uncommon in viruses. This rapid adaptation to their hosts is what makes them so successful. Influenza viruses are known for this. The pathogens causing the flu are changing so much that a new vaccine has to be developed every year.

Compared to the influenza virus, however, Sars-CoV-2 mutated rather sluggishly. But even with this pathogen, numerous mutations have already been detected since the first detection a year ago – 4,000 in the spike protein alone. The mutation D614G, for example, was not present in the viral genetic material examined at the beginning of the pandemic.

However, this mutation, which was detected for the first time in spring 2020, is now widespread. According to scientists from the COVID-19 Genomics UK Consortium, it has a “moderate effect” on transmission – Sars-CoV-2 with the D614G mutation therefore spreads more easily. In Great Britain, for example, in mid-December the largest proportion of all corona cases were due to this corona variant. However, more severe disease courses were not observed.

Health Minister Spahn said in an interview with ARD on Sunday that the entry to continental Europe is now being prevented. In consultation with the Minister of Transport, all flights from UK to Germany have been stopped since midnight. With a regulation on Monday, the federal government wants to restrict all trips from the island state. Other countries have also already stopped travel to the UK. These restrictions will also apply to entries from South Africa. Because there, too, scientists had discovered a similar mutant of Sars-CoV-2.

The EU states will meet soon to discuss further measures. The World Health Organization also tweeted that it was in close contact with the British authorities. Further investigations and studies are now necessary.

Drosten also refers to the outstanding investigations in England. According to this, the British scientists are still unsure. Overall, the information situation is “still patchy”. This also applies to the variant in South Africa. He himself is currently “anything but worried”. But he does understand the caution with which politicians are reacting to the English reports and the “heated news situation”.

What can I do?

The AHA rules help to protect yourself from being infected with the coronavirus. These also and especially apply when new corona variants appear. So, keep a sufficient distance from your fellow human beings, think about washing your hands thoroughly and use an everyday mask where necessary and prescribed. Also reduce your social contacts and pay attention to the regulations in your place of residence. With HanseMerkur all our health insurance plans cover treatment for illnesses and conditions that are a direct result of any epidemic or pandemic including Covid-19, and this coverage will be unconditional and anywhere in the member’s Area of Coverage.