30 minutes of exercise a day, five days a week – this minimum recommendation of the World Health Organization (WHO) can protect against cardiovascular diseases, counteract obesity with all its consequences and also stabilize the psyche. In addition, there is now also a possible protection against severe Covid-19. 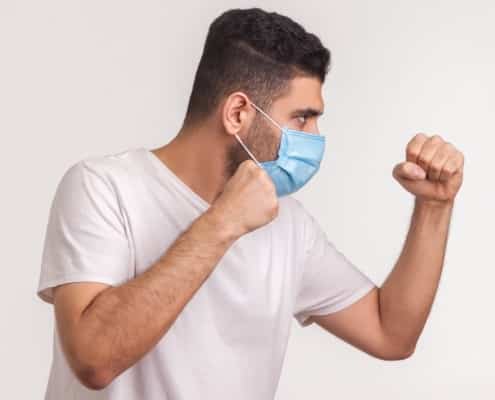 A California research team analysed data from the health care company Kaiser Permanente from more than 48,000 participants. Their patients are regularly asked about their physical activity by the attending physicians. Anyone who was active for more than 150 magical minutes was considered active, whoever exercised less than 11 minutes per week was considered inactive. The middle field was occupied by all those who reported 11 to 149 minutes of physical activity.

The risk of death decreases by a factor of 2.5

The differences were considerable. Inactive patients were 2.26 times more likely to end up in hospital after a Sars-CoV-2 infection than those who had been classified as active. In addition, they were 1.7 times more likely to have to be treated in an intensive care unit. The risk of dying for inactive infected people was even 2.5 times as high.

“Speak-Sing-Test” for the intensity of movement

In an interview with Spiegel online, study director Robert Sallis gave a vivid example in order to give a rough feeling for the required amount of effort: One should try so hard that one could still talk but no longer sing.

Whether physical activity is actually the decisive factor for the better chances of survival, however, has not ultimately been clarified. Because maybe healthier and fitter people are simply more enthusiastic about exercise anyway. However, the researchers have already calculated known risk factors for Covid-19 such as obesity, smoking, diabetes, heart disease and cancer from the data.

The conclusion of the researchers is: “Consistent compliance with the guidelines for physical activity was strongly linked to a reduced risk of serious Covid-19 events in infected adults.” They therefore recommend that health authorities encourage physical activity and include routine medical care to be included.

“Aside from vaccination, the best thing you can do is exercise,” says study leader Sallis. Apparently, this also applied to people who were overweight. Anyone who stayed below a BMI of 40 and did enough exercise did not have an increased risk of severe Covid-19 infections.