Covid-19: Hope for a passive vaccination

Passive vaccinations are used to treat various diseases. They contain antibodies that render the pathogens harmless in the body of an infected person. Such a vaccination could also protect SARS-CoV-2 infected people from severe disease – or help seriously ill people to recover.

In addition, it could prepare healthy people who have had contact with infected people in advance against the virus – but only for a certain time.

Researchers from the Berlin Charité and the German Center for Neurodegenerative Diseases (DZNE) have found an important basis for the development of a passive vaccination against COVID-19: They have identified highly effective antibodies against the coronavirus SARS-CoV-2. 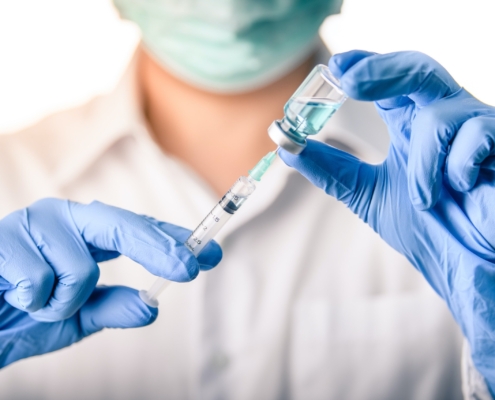 Plasma donations with antibodies are already being used

Plasma donations from recovered Covid-19 patients are based on the same principle of action as passive immunisation and are already used to treat seriously ill infected people: The donated blood plasma contains specific antibodies against SARS-CoV-2, which the plasma donor’s body against the virus during infection has formed. They can support the immune system of the seriously ill in the fight against the viruses.
But the effort involved in obtaining blood plasma and preparing it for a donation is high. In addition, the composition of the antibodies varies from patient to patient – and their effectiveness varies. In addition, the administration of blood plasma can cause side effects.

Making the most effective antibodies in bulk

The aim of the research team led by Dr Jakob Kreye and Dr Momsen Reincke is therefore to develop drugs that contain pharmaceutically manufactured antibodies against SARS-CoV-2. “Ideally, the most effective antibody is produced in a targeted manner on an industrial scale and with consistent quality. That is the goal we are pursuing,” says Reinecke.
In order to identify the most effective antibody candidates, the scientists initially isolated almost 600 different antibodies from the blood of recovered COVID 19 patients.

Through laboratory tests, they were able to narrow this number down to a few particularly effective specimens. They then had them artificially recreated using cell cultures.
The selected so-called neutralising antibodies couple to SARS-CoV-2 and thus prevent the pathogen from entering body cells and multiplying. In addition, viruses marked with antibodies are eliminated more quickly by immune cells.
Proof of effectiveness in hamsters
Studies on hamsters, which, like humans, are susceptible to infection by SARS-CoV-2, confirm the high effectiveness of the selected antibodies. “If the antibodies were administered after infection, the hamsters developed at best mild symptoms. If the antibodies were given as a preventive measure – before infection – the animals would not become ill,” says Kreye, who coordinates the research project.

How long does the vaccination work preventively?

Clinical studies have yet to confirm the effectiveness of passive vaccination in human subjects – and also its tolerability. Some SARS-CoV-2 antibodies not only bind to the virus, but also to various organs, which could trigger undesirable side effects. The researchers expect that approval could take place at the end of this year at the earliest.
They are already working together with a partner from industry to create the prerequisites for effectively producing the antibodies in large quantities. Then production could be ramped up quickly after approval.

Over 150 coronavirus vaccines are currently in development around the world and hopes are high of one coming to market in record time to ease the global crisis. Several initiatives are underway to help make that possible, including the U.S. government’s Operation Warp Speed, which has pledged $10 billion and aims to develop and deliver 300 million doses of a safe, effective coronavirus vaccine by January 2021. The World Health Organisation is also coordinating global efforts to develop a vaccine, with an eye towards delivering two billion doses by the end of 2021. Vaccines however must go through a three-stage clinical trial process before they are sent to regulatory agencies for approval, so even with unprecedented attempts to fast track what is usually a very lengthy process that spans years, it still takes a long time.

In the Middle East a vaccine has been for use among emergency personnel in the United Arab Emirates (UAE) since August 2020, and more of the vaccines are being tested around the world are close to such extend that they are already being rolled out and used for the most high risk people. Phase I and II trials of the Sinopharm vaccine were conducted in China, when it was shown to generate neutralising antibodies in 100 percent of volunteers. The UAE was then chosen to conduct a phase III trial due to its diverse demographic with the country being home to over 200 nationalities, this enabling scientists to test the response in multiple ethnicities. In total, 31,000 people have since been recruited in Abu Dhabi and Sharjah in the UAE to test two strains of the vaccine. More people have been recruited for the same trial in Jordan and Bahrain.

At HanseMerkur we realise the pandemic is an uncertain situation for our customers and people are worried about the expenses related to the coronavirus. Currently health insurers do not mention that they cover Covid-19 vaccinations simply because nobody really knows when one will official be approved as being safe and effective. This is however something that is being closely monitored and under constant review to ensure HanseMerkur remains a leader in terms of the treatments and care accessible to our members.