The fact that a Sars-CoV-2 infection can be contagious before the first symptoms appear has contributed enormously to the virus’s march to victory.

People infected with the Delta variant generally do not have COVID-19 symptoms until two days after they start shedding the coronavirus. With this variant, the infectious time window is now even about one day longer than with the original Sars-CoV-2 type. One more day when unsuspecting infected people could go to work, meet friends or dine in a restaurant – and then set chains of infection in motion. 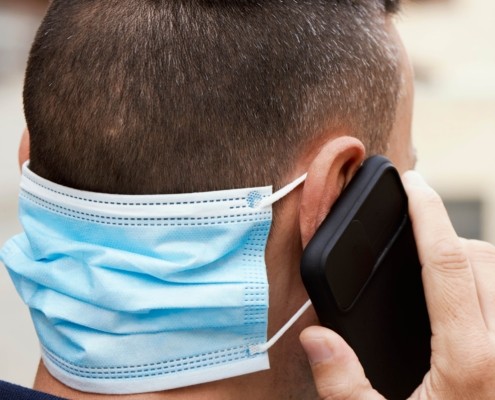 A team led by Benjamin Cowling at the University of Hong Kong has now investigated how the infectiousness increased in Delta. The researchers presented their results in a pre-published study.

The researchers evaluated the data from 101 people who were infected with the delta variant between May and June 2021 in the southern Chinese province of Guangdong. In particular, they monitored whether close contact persons of the study participants became infected.

In the study participants, there was an average of 1.8 days between infectivity and the first signs of illness. Three-quarters of the infections from contact persons (74 per cent) occurred in precisely this symptom-free, but infectious, time window. In other words, at a time when the infected “vectors” still felt healthy.

Previous research has shown that people infected with the original variant of the virus were only contagious for an average of 0.8 days before symptoms broke out.

This fact should have contributed to the fact that the delta mutant spreads so rapidly. “The virus is just very difficult to stop,” Cowling said in a statement in Nature News.

In addition, those infected with Delta usually produce much larger amounts of viral load – and are therefore much more contagious than people who were infected with previous variants. Incidentally, this also applies to people who have been vaccinated with a breakthrough infection.

It is becoming increasingly apparent that various factors come together at Delta that has made it the most contagious variant of the coronavirus to date.

“This helps to understand how this variant managed to overtake both the wild-type virus and other variants and become the dominant strain worldwide,” said Barnaby Young of the National Center for Infectious Diseases in Singapore, commenting on the results. Incidentally, with his close relative, Sars-1, which was significantly more deadly, infected people were not contagious before the onset of the disease. This is one of the reasons why its spread could be contained.

The Delta variant has spread to many countries around the world and has been blamed in particular for surges of cases in the UK and Russia. British authorities have said the Delta variant was “60 per cent more infectious” than the Alpha strain, first detected in the UK. The World Health Organisation stated last week that the Delta strain was now present in 132 countries, one of which is the United Arab Emirates (UAE).

You need travel insurance “now more than ever”

Traveling has always come with complications, but the coronavirus pandemic has made it more challenging than ever. The latest COVID surge is sending shock waves across the travel industry, prompting many people with vacation plans to have second thoughts.

The delta variant has made travel even more unpredictable. Traveling during the delta surge presents additional safety risks due to increased transmissibility and travel uncertainties from trip cancellations or delays. Several countries are taking measures to protect their citizens from the virus. Some have even banned entry or lifted visa exemptions for people traveling from affected countries and several countries have also made travel health insurance mandatory if travellers wish to enter.

Particularly with a view to the delta variant, it can therefore make sense in many situations to continue to wear a mask – even if this may not be expressly required. Since Delta transmits so easily and quickly, this can even be useful outdoors in certain cases.

For comparison: US experts had already compared the risk of infection posed by the mutant with that of chickenpox. Therefore, for the protection of yourself and those around you, you should continue to be vigilant and careful.

However, even though there has been a lot in the news about ‘breakthrough infections’ among the vaccinated, we continue to see that those who are not vaccinated are the ones getting very sick, being hospitalised, and dying.

“To protect yourself, vaccination is key.”