Deltacron: What we know about the hybrid virus

Deltacron is a so-called recombinant virus that combines properties of the corona variants Omicron and Delta. How does such a mixed virus arise, what do we know about its properties, above all: how dangerous is it? 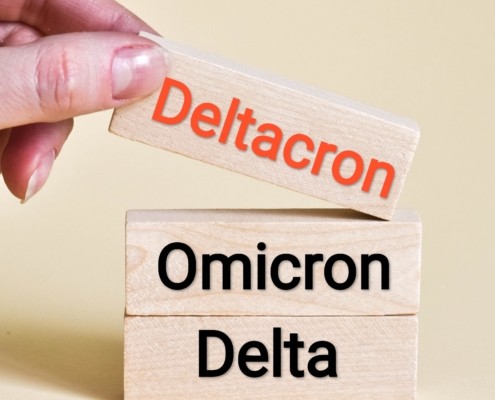 Deltacron is a mixed variant of the Sars-CoV-2 variants Delta and Omicron. Virologists refer to such hybrid viruses as recombinant viruses.

They can arise when a living being is infected with both virus variants at the same time. If both types of pathogen then also happen to multiply in the same body cell, they can exchange genetic material: A hybrid virus with properties of both predecessor viruses is created.

In the case of Deltacron, the spike protein (= surface protein that the pathogen can use to penetrate body cells) is essentially based on the genetic blueprints of omicron, while the rest of the virus mainly corresponds to the Delta variant. According to the international genome database Gisaid, the recombinant viruses found in France are derived from the Delta lineage AY.4 and the omicron lineage BA.1.

“Further research is needed to determine whether these recombinants descended from a single common ancestor or could result from several similar recombination events,” Gisaid wrote in a statement.

Is Deltacron more dangerous than Omicron or Delta?

The fear is that such a recombinant virus combines dangerous properties of both original variants. In the case of Deltacron, it would be Omicron’s higher contagiousness paired with Delta’s more pathogenic potential.

But it doesn’t look like that at the moment: Although Deltacron has probably already developed at the beginning of January, it is not spreading much. So far, only seven cases have been identified in France.

It is not yet possible to estimate whether the hybrid virus causes more severe disease progressions. In order to be able to assess this, one would have to observe many more affected patients.

Do the current vaccines protect against Deltacron?

It is also still unclear how well the current vaccines or previous infections protect against the hybrid virus. However, since Deltacron is equipped with the spike protein from Omicron, which is the target of the current vaccines, the effectiveness of the vaccinations could also be reduced compared to this variant – as compared to Omicron.

Here, too, it can be assumed that the vaccinations will continue to provide good protection against severe courses.

What are the symptoms of a Deltacron infection?

So far there is no evidence that a Deltacron infection causes other symptoms than, for example, Omicron. These include a cold, headache, fatigue and sore throat.

It can also be assumed that some infected people – as with the previous virus types – will not feel any symptoms.

Do we have to reckon with further variants?

A prerequisite for a recombinant virus is that two different virus populations circulate in the population. The probability of a genetic fusion is particularly high in phases in which many people become infected.

This is currently the case in many places around the world. Even if the omicron variant now dominates the infection process, Delta has not completely disappeared. And other virus types are also circulating, and new virus types will be added – and with them options for other recombinant viruses.

However, it is not certain that these bring the most dangerous of both variant worlds with them: the exchange of genes takes place, similar to mutations, according to the random principle. A recombination of the genes can make the virus more dangerous, but also less successful.

Compared to influenza viruses, recombinant virus variants are also far less common in Sars-CoV-2. When influenza viruses replicate, their genome divides into many shorter RNA segments that can easily be exchanged if a cell is double-infected with different virus types.

In the case of Sars-CoV-2, on the other hand, the genetic strands are not segmented. Therefore, if two different types of virus are present in a body cell, the strands of both must break randomly for gene exchange to take place.

Overall, this is rarely the case, explains virologist Sandra Ciesec in the NDR podcast Coronavirus update. However: “If, of course, the number of infections is now very high, i.e. if the probability that both viruses will meet at the same time is very high…, the probability that something like this will happen is higher.”

Where has Deltacron circulated so far?

After a false alarm at the beginning of January, which can be traced back to a contaminated laboratory sample, French scientists from the Institute Pasteur last week provided evidence of a hybrid of Delta and omicron for the first time. According to the Gisaid genome database, the variant appears to have been in circulation since the beginning of the year.

Viruses with a similar genetic profile to those discovered in France have also been found in the United States, the Netherlands and Denmark. The Robert Koch Institute confirmed the first Deltacron case in Germany to the Spiegel magazine.

Researchers have also identified around 30 cases of a Deltacron virus in UK. However, these differ genetically from the French samples. The two forms may have evolved independently.

WHO President criticizes reducing the tests

Against the background of the recombinant virus, World Health Organization President Tedros Adhanom Ghebreyesus is concerned that testing has been drastically shut down in many countries. “That prevents us from seeing where the virus is, how it’s spreading and how it’s evolving. Testing is an essential tool in fighting the pandemic,” he said in a video address.