Life at a distance: Most people find the measures to contain the pandemic oppressive. For people with depression, however, the limitations have a completely different dimension: They can rob them of the support and interactions with others that stabilise their mental health.

During the pandemic, scientists working with Professor Ulrich Hegerl, Chairman of the Board of the German Depression Aid Foundation, asked people with and without depression about the effects that the contact restrictions and other measures have on them. The result of their “Germany Depression Barometer ” is clear: People with depression are hit many times harder by the pandemic. 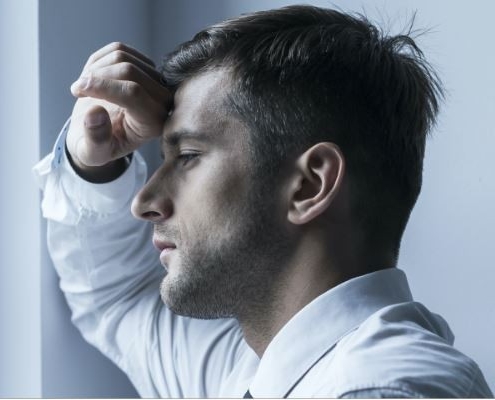 People with depression were not more afraid of contracting the coronavirus than the rest of the population (43 percent versus 42 percent). However, they experienced the lockdown much more often as stressful (74 percent versus 59 percent). And in the long term too: In July of this year, 68 percent of them said they found the situation depressing. In the general population it was only 36 percent.

Lena Ulrich, 37-year-old who suffers from depression recently reported on her personal experiences at a press conference for the presentation of the depression barometer in Germany. Lena has been living with her mental illness for many years, but has learned to deal with it but has found the lockdown particularly tough.

When the support and connection are lost

Different pillars are decisive for her stability. Firstly there is her work as a freelancer, which, in addition to financial security, also involves exchanges with other people. There is also a network of friends that further strengthens Lena and  there is also regular exercise in the fitness studio, because sport, as experts and those affected know, supports the mental stability of depression considerably.

“All of that can be removed from one day to the next in lockdown,” explained Lena and the negative effects were quickly felt. Instead of the mild depressive episodes that still haunt her from time to time, she fell into the hole of major depression for the first time in years. “It feels like you imagine hell as a child,” says Lena.

It can take 10 years off of somebody’s life

“Such a phase cannot be compared with the bad mood that mentally healthy people experience from time to time,” says Professor Hegerl. Depression is a serious illness. The lifespan of those most seriously affected is estimated to be shortened by up to ten years.

One of the effects of the disease is that those affected are less able to take care of themselves – less exercise, poor nutrition, often more alcohol and cigarettes. In addition, there are sleep disorders and constant stress, which, among other things, can damage the cardiovascular system considerably.

It is also therefore not surprising that current studies suggest depressed people are more likely to get seriously ill with Covid-19. “Depression is a disease that negatively affects the body in many areas, including the immune system.”

During lockdowns, the Barometer survey showed behaviours that adversely affect depression increased. The Depression Barometer survey showed that people in a depressed phase, for example, suffered almost twice as often from a lack of daily structure (75 percent) and brooding (89 percent) than the general population (39 and 41 percent). In isolation at home, depressed patients also stayed in bed much more often during the day (48 percent versus 21 percent).

Therapeutic care falls by the wayside in lockdown

Medical and therapeutic care is also likely to fall during lockdowns: In Europe every second person affected reported that psychiatric and therapist appointments had been cancelled with 13 percent of patients cancelling appointments themselves for fear of infection. Likewise, every tenth planned hospital stay was cancelled.

Self-help group meetings, which are an important support for many people with depression, are often not taking place and those who fell ill with depression for the first time during the pandemic are also being affected. The already arduous task of organising help was made even more difficult and consequently more people are missing out on getting the help they need.

Lena was fortunate in that her therapist immediately switched her offer to online sessions. “That worked surprisingly well for me,” reports Lena “with a very nice and supportive atmosphere developing online”.

Psychiatrist Professor Hegerl also rates therapeutic online solutions positively. If the diagnosis has already been made and there is a relationship of trust between the client and the therapist, that is a good bridge. Many medical insurance policies now come with an integrated EAP which can provide such services. He does however also have a few reservations stating: “Online sessions can help, but they are not a complete replacement”. Many signals can be lost digitally. “As a therapist, I value the chance of recognising a lot of extra details and information that can be picked up from sitting directly across from each other and looking into the patient’s eyes.”

Behavioural Therapy as an online course

Online programs based on the principles of cognitive behavioral therapies can provide further digital support for the soul. In various modules, the patient learns to decipher disease mechanisms and to develop new ways of thinking and behaving. However, these online programs are most effective in combination with professional support, says Professor Hegerl.

In view of the second lockdowns now taking place around the world, he fears that the misery in the care of the mentally ill will repeat itself: “For people with depression, retreating into their own four walls will have many negative effects again,” the psychiatrist predicted. People with depression would have more time to ponder and could get deeper into the depression. “These are aspects that cause me great concern.”

Will there be more suicide attempts?

It is feared the number of suicide attempts would rise if the quality of care drops again, said Hegerl. People are not driven to suicide by financial problems, but because underlying depression is not being adequately treated.

The statistics show how crucial good care is evidenced by the fact that in the last few decades the number of suicides in Germany has halved through appropriate treatments. The change in attitudes and approaches is also spreading quickly around the world for example in places like the UAE who are setting the pace in the Middle-East with radical new laws and approaches to this subject and mental health generally.

Professor Hegerl does not fear that more people will become depressed due to further or extended lockdowns. “We do not expect a depression epidemic triggered by the pandemic,”. He explains that depression is primarily a matter of disposition and adds “The influence of external circumstances is often overestimated in the population.” If a person does not have the appropriate disposition, he will not develop depression even in times when he is feeling very badly.

Jogging instead of the gym

Lena, on the other hand, faces the latest lockdown with some confidence. “I expected that to happen,” she says. Her professional order book, which had collapsed in the spring, has recovered, the psychotherapy via video chat works, and instead of going to the gym, she has now – like many other people – started jogging. But not everyone who is depressed has the power to take matters into their own hands. Staying positive and getting help during the “lockdown” remains problematic for many, and we may never know who is actually suffering but we can all help each other with the simplest of actions….just picking up the phone or connecting via video chat and saying “Hello, just thought to give you a quick call to catch up as we don’t see each other so much these days……”