Mobile phone radiation apparently makes you hungry: those who are exposed to it eat significantly more afterwards. Above all, the appetite for carbohydrates increases.

Earlier experiments with rats had already indicated such a connection. A team led by Prof. Kerstin Oltmanns, head of the Section for Psychoneurobiology at the University of Lübeck, has now also tested the effect on human test candidates. 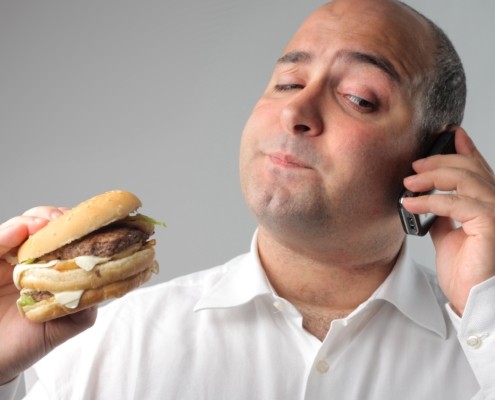 To do this, the scientists invited 15 healthy men around the age of 24 to the experiment. It consisted of three sessions at two-week intervals, to which the participants appeared sober. Then, in two of the sessions, they were exposed to cell phone radiation for 25 minutes, coming from two different cell phones. In another round, the radiation was only faked. The men were then allowed to serve themselves at a buffet.

Up to 27 percent higher calorie intake

The effect was amazing: after mobile phone radiation, the men consumed between 22 and 27 percent more calories. Subsequent blood analyses showed that they had primarily consumed more carbohydrates.

With the help of a so-called phosphorus magnetic resonance spectroscopy (MRS), the research team also determined that the energy turnover in the brain had increased after the irradiation.

Mobile phone radiation could therefore be a possible factor in overeating and therefore weight gain .

A logical and practical countermeasure might be to leave cell phones idle just before and during meals. However, the researchers have not investigated how long it takes for the appetite-stimulating effect of the radiation to wear off.

“These findings could open new avenues for obesity and other neurobiological research,” the authors write. In particular, how mobile phone radiation affects the brain and eating behaviour of children and young people must be further investigated in the future.

Every sixth child is overweight

According to the Robert Koch Institute, about every sixth child in Germany is overweight or obese. Among the 11- to 13-year-olds it is even one in five. Obesity can affect health as early as childhood, and this becomes even worse in adulthood. Health consequences such as type 2 diabetes, cardiovascular diseases and joint problems are becoming increasingly common at younger and younger ages. The sight of kids spending hours each day on mobile phones and tablets, chatting with friends, engaging with social media and surfing the net is becoming increasingly common in modern technology enabled cities like Dubai, but at what cost to their health, and now it would seem also their waistlines, and not just because of increased inactivity.