The Complete Guide to Fatigue Management

Are you feeling exhausted and tired? Most of the time, this is just a signal from your body that it needs a break. You should only take a closer look if fatigue is permanently affecting your performance. The main causes of persistent fatigue are lack of sleep, physical and mental exertion, and overwork. But diseases and medication can also make you chronically tired. Read more about the causes of fatigue and what you can do about it. 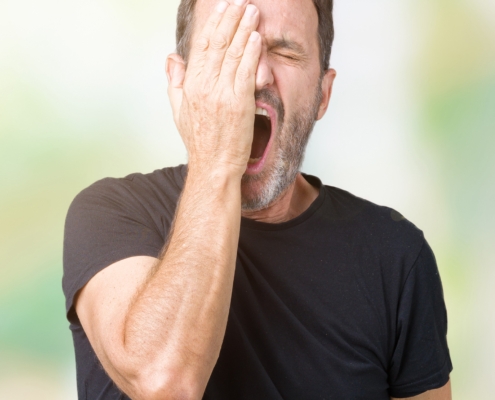 Fatigue in itself is not a disease. Rather, it is a natural signal from the body that it needs rest and breaks (e.g., due to an acute lack of sleep) or that it is lacking in certain nutrients.

It is different if someone is constantly tired and exhausted and maybe even tends to nod off during the day. Then there is often listlessness, listlessness and reduced physical and/or mental performance. All of these are signs that something is wrong.

Lack of sleep is very often the reason for fatigue. But how much sleep does a person need? This varies greatly from person to person – some people are born sleepers a lot, others generally get by with less sleep.

Age also plays a role: Babies sleep an average of 17 hours out of 24 in the first three months of life. This average sleep time drops to around 14 hours by the end of the first year of life. On average, two-year-olds need around 13 hours of sleep, and four-year-olds around 12 hours. By the age of six, children can usually get by with 11 hours of sleep.

Adults don’t have to sleep as long to be fit the next day: 40-year-olds usually sleep about seven hours at night. The need for sleep generally decreases with age. For a healthy 80-year-old, about six hours of sleep at night are usually enough. But as mentioned – these are all just guidelines. Everyone has their own personal need for sleep.

Tiredness can have various causes and does not necessarily have to be a sign of illness. An unhealthy lifestyle often causes fatigue. Below is a list of the main causes of fatigue.

Diseases as a cause of fatigue

In addition, various diseases can be accompanied by fatigue. The most important examples are:

Tiredness from medication or addictive substances

Certain medications can make you tired. These include antidepressants, neuroleptics (medicines for psychotic symptoms such as hallucinations), antihypertensives and medicines for allergies (antihistamines).

Chronic fatigue syndrome (CFS) should be distinguished from tiredness caused by lack of sleep, stress, anaemia, cancer, and the like. It is also called chronic fatigue syndrome. It is a complex and elusive condition associated with prolonged fatigue for no apparent reason. Other symptoms such as insomnia, sore throat and muscle pain also occur at the same time. The exact cause of CFS is unknown.

The clinical picture is often abbreviated to ME/CFS. ME stands for Myalgic Encephalomyelitis – i.e., an inflammation of the central nervous system involving muscles, which is considered to be the cause of chronic fatigue syndrome.

Fatigue: when do you need to see a doctor?

Everyone knows that fatigue is a natural sign that the body needs a break. However, if you are tired frequently and for a long period of time, you should consult a doctor to rule out any medical conditions as the cause.

Frequent fatigue can indicate a serious illness. This is especially true if there are additional symptoms such as night sweats, dry mucous membranes, blood in the stool, swollen lymph nodes or unusually strong thirst. Then you should definitely see a doctor.

Other reasons to see a doctor include:

Fatigue: what does the doctor do?

At the beginning, the doctor will take your medical history (anamnesis) in an initial consultation in order to find clues to the cause of the tiredness. You should talk openly and honestly about your life situation and possible problems, otherwise the doctor may not be able to help you. Possible questions in the anamnesis interview are, for example:

The medical history is followed by a physical examination. The focus is on the lymphatic regions, the heart, the respiratory tract, the gastrointestinal and urogenital tract as well as the function of the nervous system and muscles. For this purpose, the doctor can carry out blood tests, a blood sugar measurement, an examination in a sleep laboratory with recording of the brain waves (EEG) and/or an electrocardiography (ECG).

If the doctor has identified an underlying disease as the cause of your tiredness, he will recommend the appropriate therapy. Some examples:

Infections such as influenza or colds – and with them tiredness – usually disappear on their own after a few days when the body has fought the pathogens. It may be possible, for example, to relieve the symptoms and support the healing process with antipyretics, expectorants, inhalations, etc.

Iron-rich foods usually help with anaemia due to iron deficiency. The trace element is found in plant foods such as whole grains, green leafy vegetables (broccoli, spinach), beetroot and nuts. However, the body can better utilize iron from animal products (e.g., meat). If you have a severe iron deficiency, your doctor will also prescribe an iron supplement.

If the anaemia is triggered by a lack of folic acid or vitamin B12, appropriate dietary supplements can also help.

An underactive thyroid can be treated well with medication. Those affected usually must take artificial thyroid hormones for life.

Cognitive behavioural therapy combined with regular exercise can help with mental illness. If necessary, medication will also be prescribed.

Sleep apnoea is usually caused by being overweight. Those affected should therefore lose weight as much as possible. A few kilos less are usually enough to breathe more regularly at night and sleep better. If you also avoid alcohol and sleep on your side, you can get even better control of the nocturnal breathing pauses. If all of this is not enough, breathing masks, bite splints or surgical corrections can be considered.

Fatigue: what you can do yourself

You can do a lot yourself to keep yourself fit and efficient and to prevent attacks of fatigue. But first make sure that the tiredness is not due to a serious illness.

Overall, fatigue can be treated – but usually only through changes in lifestyle and daily routine. In addition, the successes do not appear overnight, but step by step. Give yourself the time you need.