The effectiveness that the manufacturers claim for their vaccines have a wide range and some may protect better than the numbers suggest. So what is the story behind these numbers?

In the case of immunisations against flu, measles or polio, little thought has been given to this topic so far – usually only one vaccine is available for this anyway. On the other hand, the efficacies that are certified for the various coronavirus vaccines are now being discussed.

Initial groups getting the shots prefer not to be vaccinated with the “less effective” vaccines from AstraZeneca or later Johnson & Johnson, but is the difference really as big as the numbers suggest? 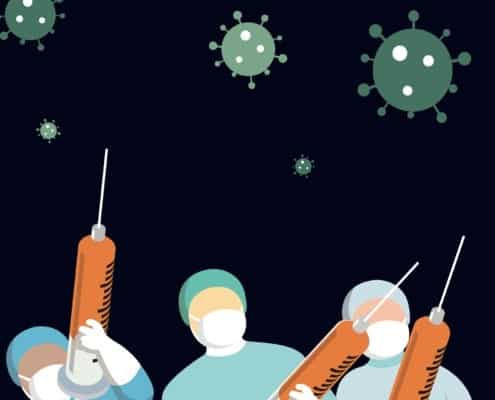 To test the effectiveness of a vaccine, large phase III studies compare how many participants get the disease without and how many despite the vaccine. The sick include anyone who developed symptoms, even if it is just a temporary cough.

With the new coronavirus vaccines, for example, it looked like this: of 100 test subjects who developed symptoms, only 5 or 6 were in the vaccination group for the mRNA vaccines from BioNTech and Moderna, the remaining 95 and 94 in the vaccine group study, who became infected, were not vaccinated (so 95% and 94 % effectiveness).

With the AstraZeneca vector vaccine, these values ​​were closer together: of the participants who developed symptoms, 40% were vaccinated and 60% were not vaccinated (so 60% percent effectiveness). With the vector-based vaccine from Johnson & Johnson, the ratio should be slightly better at 34 versus 66 (so 66% effectiveness).

Compared to the mRNA vaccines, the vector virus vaccines appear to be less effective. But you have to know that it has already been determined in advance that 50% effectiveness is to be rated as a success.

Above all, in all studies on the vaccines approved so far, there was no person who was seriously ill among the vaccinated. And that is the real good news. Even the less effective vaccines are still extremely effective at protecting against severe disease. And that was initially the main goal of the vaccinations against Sars-CoV-2.

Another form of effectiveness describes how well a vaccine protects not only against the onset of a disease, but also against infection. Doctors call this “sterile immunity”. If this is guaranteed, it means that as a vaccinated person you cannot infect anyone else.

This is the case, for example, with the combination vaccine against mumps, measles and rubella (MMR). It effectively protects not only the vaccinated person, but also those around them and thus increases herd immunity.

With the coronavirus vaccines, however, at this point it is still unclear. Experts suspect that the vaccines may not completely prevent infection, but could significantly reduce the likelihood of passing the virus on. That too would make a major contribution to containing the pandemic.

All viruses mutate continuously – with the flu virus, for example, it happens so quickly and extensively that manufacturers have to mix up a new vaccine every year. This then protects against the most common of the currently circulating flu virus types, but not all, but this is not a problem. All previous infections with previous flu viruses ensure the body a kind of basic immunity against the diverse pathogens.

For this reason, adults and older children are much less likely to develop influenza than younger children. Because you have come into contact with flu viruses many times in your life. Your immune memory therefore also reacts to new flu viruses, albeit less than to “old friends”.

Sars-CoV-2 is also constantly changing – albeit much more slowly than flu viruses. In addition, most mutations play no role in the infection or the vaccine effect – they change gene segments of the virus that the vaccine does not target.

However, some vaccines against current or future mutations could actually lose their effectiveness. At least the AstraZeneca vaccine in South Africa, where variant B.1.351 has spread widely, seems to be less protective.

But that does not mean that the vaccine has no protective effect against the mutant. For example, it could at least prevent severe disease progression. Whether this is actually the case and how well the vaccines works against the various mutations is still open.

This also applies to the mRNA vaccines from BionTech / Pfizer and Moderna. However, these initial studies seem to work unabated against the British mutation.

There is huge demand for vaccines from the planet’s 7.8 billion inhabitants. So, if a vaccine requires two doses, that is a lot of vials that need to be produced, preserved and delivered. Even so, more vaccines may be needed, as some will inevitably spoil during transport or handling. For now, there are a few key questions on everyone’s mind: Which is the best COVID-19 vaccine? What is available now? Fortunately, there are numerous options at humanity’s disposal.

What vaccine efficacy rate would you accept for yourself? The World Health Organisation (WHO) and most health regulators agree on this: a 50% efficacy rate for a new vaccine is the “acceptable” threshold and the good news is that by this reckoning many trials that have been conducted around the world have posted incredibly high success. Moreover, new ways of developing vaccines (such as mRNA) have been found. The utility of tried-and-tested platforms (inactivated/attenuated vaccines) had been re-affirmed. In the United Arab Emirates (UAE), there are currently four approved vaccines: Sinopharm (December 9, 2020), Pfizer-BioNTech (December 23, 2020), Sputnik V vaccine (January 21, 2021), and AstraZeneca (approved in Dubai on February 2, 2021).

Whether you have the most expensive private health insurance or are reliant on the free vaccines being provided by most governments, choices are limited. There are currently not enough to go round and most people, if they can get access to a vaccine, will not be able to choose which one. So with so many vaccines out there and with such a range of reported efficacy figures is one better than another? Should we wait for a specific one? Or will they all help sufficiently such that we should take whichever one is made available to use. The following list shows a number of vaccines against SARS-CoV-2 that all took less than 12 months to be made available to the public.