Microplastics Found in our Livers

Microplastics are everywhere: in water, in food, in the air. The idea is worrying – but so far there is no concrete evidence that it can harm humans. There being harmless, however, seems increasingly doubtful.

Blood tests have now shown that microplastics actually circulate in the human body and researchers from the Eppendorf University Hospital in Hamburg have now found evidence of this for the first time that they can accumulate in the body: they have detected microplastics in human liver tissue. To do this, they examined tissue samples from the liver, kidneys and spleen of six people with liver cirrhosis and five people without liver disease. 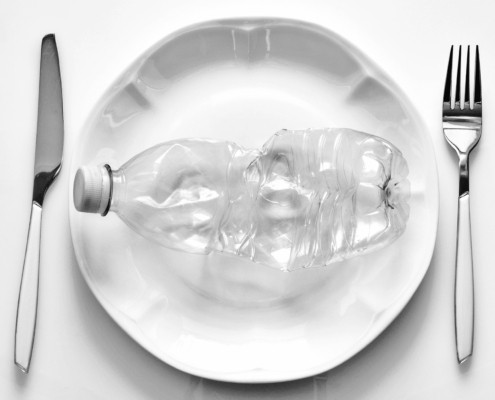 They found what they were looking for in the samples from cirrhotic liver tissue: they found a total of six different types of microplastics here. In contrast, the scientists did not find any plastic particles in subjects with healthy livers.

A possible explanation for this is the increased portal vein pressure in people with liver cirrhosis. The portal vein – a vein – carries low-oxygen but nutrient-rich blood from the intestines to the liver, among other places. There, the nutrients from the blood are processed and the drug substances and pollutants contained in the blood are broken down.

If the liver is badly scarred, blood can no longer flow through it properly. This increases the pressure in the portal vein.

This portal vein hypertension in turn seems to affect the intestines: with increased portal vein pressure, its barrier function is weakened – the intestinal wall becomes more permeable. In this way, significantly more microplastic particles could get from the intestine into the blood of the portal vein, according to the hypothesis. A corresponding observation was made earlier in connection with bacteria that infect the liver coming from the intestine.

“Future studies must show the importance of depositing microplastics in the liver on the course of the disease in patients with liver disease,” says Dr. Thomas Horvatits, Senior Physician in the 1st Medical Clinic and Polyclinic of the UKE.

In fact, it cannot be ruled out that the plastic particles could have an unfavourable effect on the course of the disease. Studies indicate that microplastics cause so-called oxidative stress and could thus fuel inflammatory reactions.

Research is made more difficult by the fact that the tiny plastic particles are often difficult to detect.

“The identification and analysis of microplastic particles in human tissue was a particular challenge for us due to the very small particle sizes and the small sample quantities,” reports Dr. Elke Fischer, head of the Microplastic Research group at the Centre for Earth System Research and Sustainability (CEN) at the University of Hamburg. “We have developed a new method for this that combines staining processes using Nile red and fluorescence microscopy,” says the scientist.

Animal experiments have already made progress. Various studies have reported accumulation of polystyrene (PS) microspheres in the gut, liver and kidneys in rodents. With negative consequences: the accumulation of microplastics was accompanied by disruptions in energy and fat metabolism, mucus secretion and the intestinal microbiome. Each of these factors can have far-reaching health consequences.

How microplastics are formed

Microplastics are formed in a variety of ways. Some are even produced specifically for use in the cosmetics industry. Others are caused by tire wear or when other plastic products wear out. These include above all synthetic fibres from the textile industry. In addition, tiny plastic particles form when larger plastic parts weather.

Microplastics enter groundwater and the oceans through sewage, rainwater and flooding. It is ingested by marine animals and ends up on the plate – and coming from the groundwater in the drinking glass.

Positive changes are being made

Many countries around the world are now waking up to the risks and taking action to reduce the amount of plastic waste which regrettably always seems to make its way into the oceans, the food chain and ultimately us. It is uplifting to see initiatives like ending free plastic bags in shops, something the UAE has adopted in July 2022 complimenting the earlier ‘Dubai Can’ initiative, backed by HH Sheikh Hamdan bin Mohammed Al Maktoum, which encourages people to refill water containers from free dispensers placed across the city of Dubai. Moreover, global chains and small independent restaurants are replacing plastic straws and cups with biodegradable alternatives which are all little things that help to make a difference, but the most powerful impacts can be realised if we all become better educated, spreading the word about the problem and taking action together to fight this environmental and health emergency.

To find out more about how you can take the best care of your liver check out our earlier article Love Your Liver.