Come November, there’s increased focus and attention on the various issues faced by men – from mental health to prostate and testicular cancer.

That’s because the month is annually celebrated as Movember, a time when men are encouraged to grow a moustache (or a “mo”), to promote the causes. The initiative began in 2003 in Australia, where men were encouraged to grow their facial hair in return for sponsorship money that was donated to charities supporting prostate cancer research.

Since then, it has snowballed into a global movement that includes everything from men’s health projects to moustache patterns on cups, clothes and accessories. 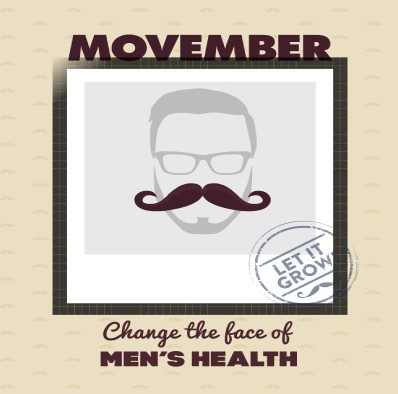 Movember is the leading charity changing the face of men’s health on a global scale, getting men to grow a moustache is a fun way to raise awareness and fund research related to men’s physical and mental health, while challenging them to get physically active. Their mission is focused on the three major causes:

So, what does growing a moustache actually achieve?

Movember began in 2003 in Melbourne, Australia with just 30 men and has since catapulted onto the world stage. Today, according to the Movember Annual Global Report, the movement boasts almost one million members and last year raised $121 million worldwide for an array of men’s health initiatives chosen by the foundation’s board.

Like the pink ribbon for breast cancer, facial hair of all shapes and sizes has become the symbol of men’s health, persuading men to finally feel comfortable talking about their health and their bodies. By virtue of changing their appearance, those taking part in the Movember campaign break free of social taboos and become adverts for men’s health, learning about risks that they face in the process. And with men 14% more likely to develop, and 37% more likely to die of cancer than women, the cause couldn’t be clearer.

Although prostate cancer was the Movember foundation’s initial focus, the charity has since become passionately involved with the fights against both testicular cancer and mental health too.

The more you know, the better equipped you are. So, learn, ask questions and give yourself the best possible odds.

Prostate cancer is the most commonly diagnosed cancer in men, and according to Cancer Research UK, one in eight men will be diagnosed with prostate cancer at some point in their lives. If left untreated, prostate cancer cells may eventually spread from the prostate to other parts of the body, particularly the lymph nodes and bones. The most worrying aspect of the disease is that most prostate cancers develop without men experiencing any early symptoms.

Although the majority of prostate cancers have no symptoms when in the early stages, advanced cancers which have spread throughout the prostate can cause urinary symptoms, including:

Although these symptoms are common to other conditions, if you are experiencing any of the above, it is important to contact your doctor. Also, note that there is currently no reliable screening test for early prostate cancer in healthy men, therefore doctors will usually combine three test to diagnose prostate cancer. Today the prostate specific antigen (PSA) test, digital rectal examination (DRE) and a biopsy is carried out to help diagnose the condition.

Testicular cancer is one of the less common cancers, and unusually, it normally affects younger men. One of the most treatable types of cancer, according to Cancer Research UK, around 96% of men with early-stage testicular cancer will be completely cured. In cases of more advanced testicular cancer, where the cancer has spread outside the testicles, there is an 80% chance of being cured.

Men should check their testicles every month for any unusual lumps. A home test could lead to early detection, which increases chances of survival.

Top Tip: It is unusual to develop cancer in both testicles at the same time. So, if you’re wondering whether a testicle feels normal, compare it with the other.

If you do find a swelling in your testicle, make an appointment and have it checked by your doctor as soon as possible. Treatment for testicular cancer includes the surgical removal of the affected testicle, which should not affect fertility, and chemotherapy.

It is important to remember that just as important as your physical wellbeing, is your mental health. Unfortunately, mental health problems in men often go undetected or untreated. According to the Men’s Health Forum’s Untold Problems report, “Men often have mental health needs that are distinct from those of women and which are particularly associated with the lived experience of being male. Some of these needs are not being met as effectively as they might.”

The reasons for the shortcomings surrounding men’s mental health are often attributed to a lack of awareness that there is a problem in the first place. Often, according to The Movember Foundation, men may not be able to recognize the signs and symptoms that they experience.

There are hundreds of mental health issues, which each come with their own set of symptoms and treatments, but the most common conditions affecting men are:

Depression is one of the most common mental illnesses in men, and according to the Burden of Depressive Disorders by Country, Sex, Age, and Year: Findings from the Global Burden of Disease Study by the University of Queensland, Australia, the Middle East and North Africa suffer the world’s highest depression rates, with 5% of the population afflicted with the disease.

If you or someone you know is suffering from depression, it’s important to remember that depression is a complex medical condition that should be treated by professionals. Issues such as self-stigmatisation can prevent men from accessing the help that they need.

Why is men’s health a particular cause for concern?

According to Movember, men are dying on average 5 years earlier than women. Around 10.8 million men globally, are diagnosed with a prostate cancer. Testicular cancer is the most common cancer among young men. And the world loses one man to suicide every minute of every day, with males accounting for 69% of suicide cases.

Men’s health is emerging as an important issue in an increasing number of countries around the world, notably the United Kingdom, Germany, Austria, Switzerland, Australia, and the United States. There is also increasing interest in working with men on sexual and reproductive health issues in parts of Central and South America, Africa, and Asia. However, progress towards international contact and collaboration between men’s health advocates with an interest that extends beyond traditional clinical concerns such as erectile dysfunction or prostate cancer has so far been extremely slow.

While the United Arab Emirates has successfully transformed itself into a fast-expanding economy in the past few decades, excessive working hours, high-stress levels at work and poor and inactive lifestyles choices have all contributed to the population’s declining health in both men and women alike. What is more problematic is that men tend to keep mum about their problems.

In Dubai, United Arab Emirates (UAE) more than 100 women with financial difficulties have received the full spectrum of breast cancer care thanks to the DHA’s Basmah initiative, which was launched in 2019. The initiative makes Dubai authorities the first government entity in the world to provide a complete spectrum of care from screening to treatment for the three types of cancer (breast, colorectal and cervical cancer) under the essential benefit health insurance plan. If screenings were covered by health insurance it would help so many more people catch health problems early, reducing the need for long-term medication and other more invasive treatments and procedures.

Early detection is the best possible way to treat most health issues in men, including cancers. Therefore, it is important to undertake regular screenings and keep an eye for symptoms. There is no doubt that the number of health problems in men are rising and this calls for our attention. Keep your weight in check, avoid smoking and drinking too much, and adopt healthy lifestyle choices to prevent your risk of developing any of these cancers.