Pregnant women until recently have only been vaccinated against Covid-19 in exceptional cases but that look set to change: An extensive study reveals the mRNA vaccines of BioNTech and Moderna are just as low-risk for mothers and children as they are for the rest of the population. Another study that also came out recently, revealed the risk of serious illnesses for infected pregnant women is higher than it initially thought. So can pregnant women get vaccinated, is it safe for both mother and child and is it effective? 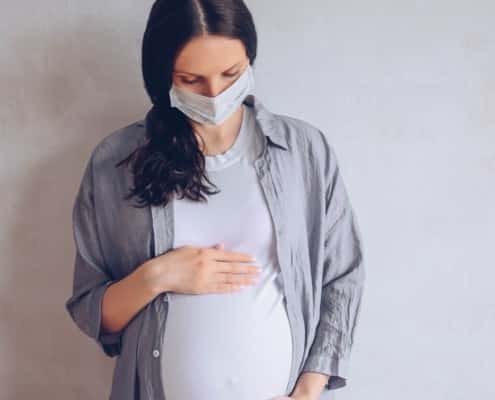 The result of a study of around 35,600 pregnant women who had received an mRNA vaccine is consequently good news: data from the USA provide no evidence of more frequent complications in vaccinated pregnant women.

Miscarriages and premature births – arguably the greatest concern of pregnant women – did not occur more frequently than before the pandemic.

The side effect profile was somewhat different from that of non-pregnant women – vaccinated pregnant women reported more often pain at the injection site. On the other hand, they suffered less headache, muscle pain and fever .

Pregnant women are usually still quite young and therefore less susceptible to severe Covid-19 infections. But even among them there are women who bring special risk factors with them: for example – obesity , diabetes or high blood pressure.

The Standing Vaccination Commission (STIKO) does not recommend any vaccination to pregnant women due to the lack of data. However, she writes: Pregnant women who have a higher risk of severe Covid-19 infections due to a previous illness could “be offered a vaccination after risk-benefit assessment and after detailed information.”

In order to provide additional protection for mothers-to-be and their children, close relatives can also get priority vaccinations now.

If the mother does not fall ill, this also protects the child from harm. A vaccination for the newborn also offers an additional benefit: previous studies have shown that newborns receive Sars-CoV-2 antibodies through breast milk.

More Covid-19 risks for mother and child than previously thought

Another study shows that not only previously ill mothers-to-be should consider vaccination: According to this, infection with Sars-CoV-2 is associated with higher risks for mothers and children than previously thought.

The research team led by Aris T. Papageorghiou from the University of Oxford has chosen a particularly meaningful investigation strategy: They compared around 700 pregnant women who were infected with Sars-CoV-2 to 1,400 expectant mothers who came through pregnancy without infection.

The researchers made sure that the two groups matched well in terms of age, previous illnesses, education, tobacco and alcohol consumption and relationship status, among other things. Only a slightly higher proportion of the infected women were overweight (48.6 versus 41.2 percent), which increases the risk of severe disease.

The mothers came from 18 countries and four continents – North and South America, Africa, Asia and Europe. Germany was not among them.

The evaluation showed that the death risk of mothers during the observation period was not necessarily alarming at 1.6 percent – but 22 times higher than among non-infected mothers (11 deaths in 700 infected people versus one death in 1,400 coronavirus-free ones).

It should be noted, however, that most of the deaths occurred in countries with less medical care.

Other risks were also increased: The risk of bacterial infections was three times higher for Sars-CoV-2 patients, and the risk of having to be transferred to the intensive care unit was five times higher than for Covid-free expectant mothers.

It is concretely eminent that the relative risk of suffering preeclampsia or eclampsia was 76 percent higher for them. These are serious pregnancy complications that are associated with increased blood pressure, edema and excessive protein excretion. With eclampsia, there are also dangerous seizures. Four of the infected mothers died from it. How exactly a Sars-CoV-2 infection can contribute is still unclear.

The children are also more at risk

The children were also more at risk: apart from the fact that more than half were born with a Sars-CoV-2 infection, newborns became more seriously ill or died more frequently if the mothers were infected with Sars-CoV-2.

The three studies thus offer pregnant women an additional basis for making a decision for or against a vaccination. It is important information for everyone that the vaccinations themselves are not very risky for expectant mothers and their children.

COVID-19 is potentially dangerous for all. Although the actual risk of severe illness and death among pregnant individuals is very low, it is higher when compared to non-pregnant individuals from the same age group. Those who are pregnant are at higher risk for being hospitalised in an intensive care unit and requiring a high level of care, including breathing support on a machine, and are at higher risk for dying if this happens.

At this point, tens of thousands of pregnant women have received COVID vaccines globally, including in the U.S., Canada, United Kingdom, and Israel. Thus far, there have been no reports suggestive of concern. On the other hand, United Arab Emirates (UAE) has expanded the eligibility criteria for the mRNA Pfizer COVID-19 vaccine to include women who are breastfeeding and those planning to get pregnant

If you are pregnant, you may also wonder about risks to the fetus if you get COVID-19. Research suggests that having COVID-19 might increase risk for premature birth, particularly for those with severe illness. So far, studies have not identified any birth defects associated with COVID-19. And while transmission of the virus from mother to baby during pregnancy is possible, it appears to be a rare event.