Nicotine sprays can help you quit smoking. They alleviate the withdrawal symptoms and thus the desire for the next cigarette. Read here how smoking cessation succeeds with the help of nicotine sprays, how they work and what ingredients they contain! 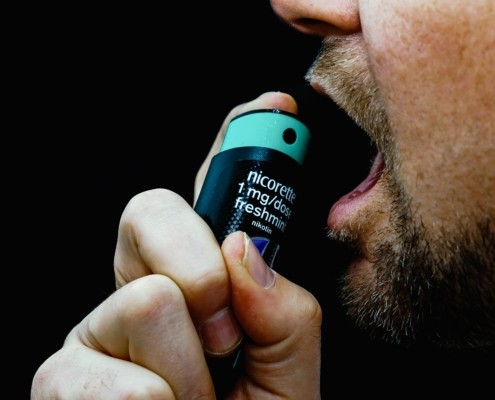 What is a nicotine spray?

A nicotine spray is a drug used to treat severe nicotine addiction. Like nicotine chewing gum, patches or tablets, it is one of the nicotine replacement therapies .

Nicotine sprays come in two forms: a mouth spray and a nasal spray. They contain a certain amount of nicotine, which gets into the blood through the mucous membranes. The nicotine sprays continue to supply the body with nicotine after you have stopped smoking. Typical withdrawal symptoms do not occur and it is easier to forego the next cigarette.

Ideally, the ex-smokers manage not to use the nicotine spray at all and still no longer feel the urge to smoke. Depending on previous smoking habits, this can take three to six months. The likelihood of successfully quitting smoking can be roughly doubled with the use of nicotine replacement therapy.

Nicotine sprays for the nose must be ordered from abroad and require a prescription. Other dosage forms are available without a prescription, but only through a pharmacy.

How does a nicotine spray work?

Compared to tablets or patches, the nicotine in a spray gets into the blood faster because it is absorbed directly through the nasal or oral mucosa. Nicotine sprays are therefore particularly suitable if you can no longer put off the desire to smoke.

Which dosage is necessary depends on previous smoking behaviour and the nicotine requirement required to reduce withdrawal symptoms. Nicotine sprays are often used in combination with other nicotine replacement therapies – such as nicotine sprays and patches.

What other ingredients does a nicotine spray contain?

How do you use a nicotine spray?

In order to get the maximum benefit, it is important to use the nicotine spray correctly:

Always reach for the nicotine spray when you crave a cigarette. Initially, ex-smokers usually need one to two sprays every 30 to 60 minutes. In total, however, it should not be more than four per hour and no more than 64 sprays per day. After about six weeks, gradually reduce the number of sprays per day – ideally by half.

Those who do not smoke with it for several weeks continue to reduce the daily sprays step by step. Try to stop using the spray completely if you only need it two to four times a day.

How harmful is a nicotine spray?

When used correctly, nicotine sprays are far safer than tobacco smoking. Nicotine sprays do not contain the harmful substances found in cigarettes, such as tar, carbon monoxide or other toxins found in smoke. Nevertheless, you should note a few things:

Nicotine sprays were developed for adult smokers. They are unsuitable for non-smokers or occasional smokers. Whether nicotine sprays work with smokeless products such as chewing tobacco, snuff or snus has not been scientifically proven.

Dependent children and adolescents between the ages of 12 and 18 may only use them if they have discussed this with their doctor. The same applies to pregnant or breastfeeding women, as nicotine passes into both the blood and breast milk.

Nicotine sprays are also not suitable for smokers with previous illnesses. This is especially true for people with:

In addition, the nicotine contained in the spray can alter the effects of certain medications. There are interactions, for example, with theophylline (vs. asthma, COPD) or clozapine (in schizophrenia ).

Talk to your doctor before using nicotine sprays. He or she can recommend the right smoking cessation therapy for you.

Nicotine sprays can be addictive

Since the nicotine in sprays works within about 30 seconds. Nicotine sprays therefore have the highest potential for addiction compared to other nicotine replacement therapies. This is especially true if you use them indiscriminately and without therapeutic support.

What are the side effects of nicotine sprays?

Side effects mainly occur in the first three to four weeks of treatment. After that, the body usually gets used to it. Whether unwanted side effects occur at all and how strong they are also depends on the dosage.

Complaints such as headaches, insomnia and dizziness are not definitely a result of chewing gum. They are also among the typical withdrawal symptoms of smoking cessation.

Smoking myths put to the test

Smoking is unhealthy – you don’t have to come to a smoker with this argument. However, many counter-answers from the smokestack advocates are not correct. Read an overview of the most important misconceptions – and how you can refute them.

Smoking a cigarette against the blues is not a good idea. Young people in particular, who want to lift their spirits by smoking, often suffer from depressive symptoms. Incidentally, cigarettes have a relaxing effect because they neutralize the side effects of nicotine withdrawal.

This is a compelling argument, especially for women, to keep smoking. In fact, fresh non-smokers gain an average of two to four kilos. However, not everyone is gaining pounds: According to a study, around 16 percent of ex-smokers even lost weight. And: If you combine smoking cessation with exercise and healthy eating, you reduce the risk of gaining weight.

Even when puffing, the smoke gets into the oral cavity and the lungs – just not as deep. However, this still means that toxins are absorbed. And they are also harmful to health to a small degree.

Light cigarettes contain less nicotine. However, smokers unconsciously try to get more of it, for example by smoking more or inhaling more deeply. In some cases, they absorb more toxins than if they had smoked normal cigarettes. So, cigarettes of the “light” brand are by no means better for your health.

Tobacco is a highly addictive substance that quickly leads to physical and mental dependence – even if those affected do not want to admit it. Because nicotine works in the reward centre of the brain. Abstinence is particularly difficult in situations that are positively linked to smoking.

Unfortunately, no – the effect of passive smoking on bystanders is still underestimated. Partners and children of smokers in particular often suffer from respiratory infections or are more susceptible to certain types of cancer. Incidentally, smoking is harmful to pets – they are at increased risk of allergies, cancer and eye and skin problems.

That may be the case, but it does double damage to the body. Researchers suspect that alcohol and nicotine influence each other in the body. The immediate consequence: a hangover the next morning has a much worse effect.

Wrong – stopping smoking is worthwhile at any age, as studies have proven several times. For example, if you stop smoking at the age of 70, you will quickly reduce your risk of having a stroke or heart attack. Nevertheless, the following applies, of course: the sooner you give up smoking, the less damage to your health will be.

In today’s world, tobacco and smoking products are not the status symbols they used to be. Gone are the days where global tobacco brands graced every billboard or advert and were marketed on every platform. The unfortunate truth is that the use of tobacco products has been linked to serious health conditions like lung cancer and emphysema. Nicotine, found in many tobacco products, has also been found to be highly addictive.

Generally speaking, international health insurance plans will cover you if you smoke. That said, when you sign up for a plan you are most likely to be asked by some insurers if you smoke and how much you smoke each day. The reason for this is because while you will generally be covered if you smoke, some insurers will have conditions and limitations if you smoke over a certain number of cigarettes a day.

It is important to note here that there is no set regulation in place for international health insurance plans and smokers. Individual insurers will have their own terms and conditions in relation to coverage.

Beyond that, Dubai does have mandatory health insurance in place. This mandatory health insurance states that pre-existing conditions must be covered. This means that if you have a pre-existing condition caused by smoking, you should be covered. Whether you have Insurance or not, the question to ask yourself is – are you willing to put your health at risk? Choosing to quit smoking is a huge step toward living a healthy life. Though it may feel insurmountable, it’s not. Quitting is the right thing to do for your health.

Nicotine mouth spray provides fast relief of craving and has clear potential as a treatment for smoking cessation. The current trial adds to the existing evidence that nicotine replacement products with faster nicotine delivery provide more effective relief of urges to smoke. The mouth spray represents an important new development in extending the range of nicotine replacement treatments, and may potentially also improve their efficacy.

Stopping smoking is one of the best things you will ever do for your health. When you stop, you give your lungs the chance to repair and you will be able to breathe easier. There are lots of other benefits too – and they start almost immediately. Keep in mind that trying something to beat the urge to use tobacco is always better than doing nothing. And each time you resist a tobacco craving, you’re one step closer to being tobacco-free. So, make this January your fresh start and join the thousands who are quitting.