What do we know about Omicron and BA.2?

Early impressions of Omicron, which was first detected in South Africa in November 2021, suggested that the new COVID strain differs from its Delta predecessor. Omicron infections appeared less severe, for one thing. Now, a new study of data from outbreaks of both variants in the U.K. confirms that what we already felt was right, was right. 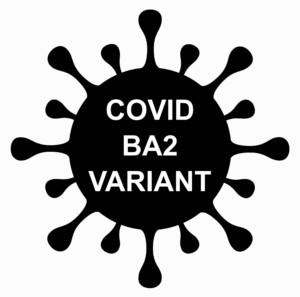 More than a million people use the British ZOE-COVID app to log symptoms from a catalog of 32 complaints every day and make the data available for research. The participants also provide information on their age, state of health, vaccination status regarding Covid-19 and positive Covid tests.

Based on the Zoe COVID app, which collects data on self-reported symptoms, the study also found that a symptomatic omicron infection was 25% less likely to result in hospital admission than in a case of delta. While omicron’s lesser severity has been known, the study is unique in its detailed analysis and in that it corrected for any distortions caused by differences in vaccination status by looking at vaccinated volunteers only.

The patients, close to 5,000 in each group, were matched and compared 1:1 with a person of the same age, sex, and vaccination dose in the other group.

Fewer hospital admissions: During the delta wave, 2.6 percent of those infected said they needed hospital treatment. During the omicron wave it was only 1.9 percent.

Faster recovery: Compared to the delta wave, the duration of the illness in the omicron wave was reduced from 8.89 to 6.87 days – i.e. by two days.

The effect on boosted people is particularly large

Another observation: The frequency of the various Covid-19 symptoms has also changed with Omicron. In the omicron wave, only 16.7 percent of the patients reported a loss of their sense of smell, while in the delta wave more than half (52.7 percent) did so.

Symptoms such as poor concentration, fever and headaches were also less common in those infected with Omicron. Sore throat and hoarseness were more common.

These observations are consistent with the fact that omicron infections primarily occur in the upper respiratory tract and rarely affect the rest of the body.

It must be pointed out that the survey is not representative: the participants were between 16 and 99 years old. Their average age was 40 years and was therefore comparatively low. Severe cases were therefore generally less common than the population average.

In addition, the data is based on self-declaration by the participants, which limits their informative value.

THE World Health Organisation (WHO) has released a new report on Omicron sub-variant BA.2 — the so-called ‘son of Omicron’. It shows that in the first week of February, the strain accounted for 21.5% of all new Omicron cases analysed worldwide. The means the sub-variant BA.2 accounts for roughly 1 in 5 new cases sequenced globally.

And in the last 30 days, Omicron (as a group of variants) took the lion’s share of the new cases identified globally (98.3%) based on genomic sequencing of PCR test samples submitted to the GISAID data-sharing hub. What it also means: BA.2 is spreading rapidly, with effects yet unclear.

Does the ‘son of Omicron’ cause worse outcomes than the original BA.1 strain?

Researchers from South Africa’s National Institute for Communicable Diseases (NICD) said patients infected with the new sub-variant suffered from “similar rates” of severe disease and hospitalisation as those with the original Omicron strain. Their findings came from data analysis from a large hospital group and the government laboratory service.

A new study conducted by a team in Japan, however, shows BA.2 does not only possess higher transmissibility — it may also cause more severe disease, able to escape treatments against COVID, a study posted on February 16, 2022 stated.

The Japanese research team found that BA.2 may be capable of causing serious illness as other variants of COVID-19, including Delta, and appears to largely escape vaccine-driven immunity. A booster shot raises efficacy to about 74% — making illness after infection less likely, it showed. The Japanese team stated BA.2 also shows “resistance to some treatments”, including Sotrovimab, a monoclonal antibody therapy used against COVID.

Why is the Omicron sub-variant spreading faster than the original?

There are number of possible reasons. Clinical researchers are still collecting clinical data to better understand why the “son of Omicron” is displacing its sibling in countries around the world.

One reason is its higher rate of transmissibility. A study shows BA.2 is about 30% more transmissible than the original Omicron (BA.1), according to the World Health Organisation (WHO) experts.

The WHO was among the first institutions to raise concern over the new strain. Its experts created a chart outlining its current thinking about the sub-variant. It shows one of BA.2’s real divergences from other variants is its higher transmissibility.

South Africa’s NICD report found that “BA.2 may be approx. 30% more transmissible than BA.1 (the original Omicron). The report states: “Consequently, this quick increase in BA.2 may lead to a steeper epidemic curve with a higher peak — and may postpone the time at which infection rates decline.”

Where is BA.2 spreading rapidly?

The BA.2 variant is reportedly spreading rapidly in countries including India, Denmark, Philippines and South Africa in the past few weeks. However, the WHO cautions that the reported global case numbers might not reflect the true spread of the virus because of a decline in testing.