Omicron: How dangerous is the new Corona mutant?

A new Corona variant is on the advance: Omicron. What do we know about it so far and why are experts concerned about it?

The Omicron variant, officially known as B.1.1.529, surfaced in November in several southern African nations. It set off alarm bells worldwide when public health officials in South Africa saw it beginning to outcompete the previous reigning variant, Delta. This suggested that Omicron could eventually spread widely. Indeed, Omicron has since been reported on multiple continents, likely due to international travel by people unknowingly infected. 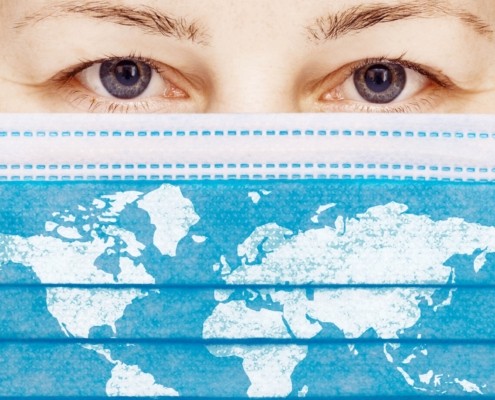 The first cases were also found among those returning from South Africa, Asia and Europe – also in Germany, Austria and Switzerland. Even at the beginning of the pandemic, experts had repeatedly warned that new, potentially more dangerous variants could develop in regions of the world that were poorly supplied with vaccines. That could be the case here.

The World Health Organization decided early this year to name the variants after Greek letters, both to simplify the discussion and to limit the stigma of having a variant named for a country.

Why do experts rate Omicron as a matter of concern?

The Omicron variant is so new that scientists are just beginning to learn about its characteristics. Because of this, experts urge caution in drawing conclusions, especially from anecdotal evidence. That said, scientists say they would not be shocked if omicron becomes as easily transmissible as Delta .

There are two main reasons the experts are concerned about Omicron.

Omicron currently appears to be spreading very rapidly in South Africa. It is unclear what the situation is in other countries in southern Africa – because little is being tested there. In fact, Omicron could be even more contagious than the Delta variant that is currently rampant in the rest of the world. Keeping the new variant in check and preventing the health system from being overloaded would then be even more difficult.

However, it is not yet absolutely certain that Omicron is actually more infectious than Delta – because the data from South Africa is incomplete. In the South African province of Gauteng, only around 80 Omicron cases have been clearly identified.

Omicron has significantly more mutations compared to other variants that have spread in the past. It could possibly be an escape mutant – a variant that could escape immune protection through vaccination (or through a previous infection).

“I’m surprised to see so many mutations in the virus,” explains Charité virologist Christian Drosten in an interview with ZDF. But he was “pretty worried.”

There is an “unusual constellation of mutations” and it is “very different” from other variants that have been in circulation so far, reports Prof. Tulio de Oliveira, Director of the Center for Epidemic Response and Innovation in South Africa.

More than 30 mutations also affect the spike protein, which is targeted by the vaccinations currently approved in Europe.

However, it is not yet possible to estimate how dangerous the new combination actually is. “You don’t always understand immediately what mutations do in real life,” says Drosten. In two to three weeks you will know more.

Given the large number of mutations, some infectiologists suspect that the virus could have originated in a person with a weak immune system – for example, an inadequately treated HIV infection or an otherwise weakened immune system. If a corona infection lasts for weeks or even months in such people, the virus would have enough time to mutate more frequently in different places – so the hypothesis.

Does the virus make you sicker than previous variants?

The early evidence is somewhat conflicting, but there are signs that symptoms from Omicron may not be more severe than previous variants. Dr. Angelique Coetzee, who chairs the South African Medical Association, has said that the early cases being seen among the unvaccinated are mild.

It remains to be seen, however, whether older and unhealthier patients will also see milder symptoms. Another caveat is that it may be too early in Omicron’s spread to see cases that have seriously progressed.

Coetzee also warns in the British “Telegraph” that the new variant of the coronavirus could also hit older people significantly harder. In South Africa, only about six percent of the population is over 65 years of age.

The good news so far: For the time being there is no evidence that Omicron could be more dangerous in principle.

Is Omicron More Dangerous for Children?

Doctors from South Africa are currently reporting that small children infected with Omicron have to be hospitalized more often than was the case with other corona variants. “There is an increase in hospital admissions of children in the age group up to five years,” said the scientist Michelle Groome of the National Institute for Communicable Diseases NICD according to the Süddeutscher Zeitung. In the area around the capital Pretoria, around 100 children under the age of five have been treated as inpatients in the past 14 days. After the group of older people aged 60 and over, they make up the largest proportion of corona-infected hospital patients.

However, the current total numbers are so low in this regard too that no reliable forecast can be made.

What are the symptoms of Omicron?

Nothing serious can be said about this at the moment either. According to the South African Medical Association, sufferers mainly report severe pain in their limbs and extreme fatigue.

However, in view of the small number of cases described, no clear conclusions can be drawn from this. Infectiologists will only be able to assess in a few weeks whether the symptoms of Omicron actually differ from the original, alpha and Delta variants.

How well do the current vaccines against Omicron work?

That cannot be said at the moment either. Compared to the wild type of Sars-CoV-2, the vaccinations had lost some of their effectiveness compared to the Delta variant. This favors breakthrough infections, for example. The protection against severe gradients, however, remains very high compared to Delta.

How well the vaccinations protect against the new variant will only be able to be said in a few weeks. But one thing is certain: every vaccination and every booster vaccination also prepare the body for new variants of Sars-CoV-2. “Nobody can say at the moment what is in store for us. But what you can really say with certainty: It’s better to be vaccinated. And it’s even better when you’re boosted,” says Drosten.

Both Moderna and BioNTech Pfizer are said to have already started preparing the vaccines for a possible switch to protect against the Omicron variant.

The Omicron variant of Covid-19 is spreading around the world, with the United Arab Emirates (UAE) detecting its first case on Wednesday in a fully vaccinated woman. With the new variant affecting even those inoculated with two doses, the Ministry of Health and Prevention has stressed the importance of getting booster shots. The UAE recently announced the availability of booster shots of Pfizer-BioNTech and Sputnik vaccines.

Good news is the current treatment against COVID, including Corticosteroids and IL6 Receptor Blockers, proven effective against the Delta variant, could very well be as effective against Omicron, experts said last week. Therefore, and like US President Joe Biden said, Omicron is a cause for concern, not a cause for panic. We managed to overcome the pandemic, or almost, thanks to stringency measures especially the face mask wearing, social distancing, sanitisation and most importantly the vaccination.

Let us just continue to do that. We will beat this one too.