Power napping: why it’s so good!

Just switch off in the middle of the day, close your eyes and treat yourself to a nap? Power naps are an excellent source of energy – in the home office as well as in the office. Read on to find out why a power napping is so good for you and what advantages provides. 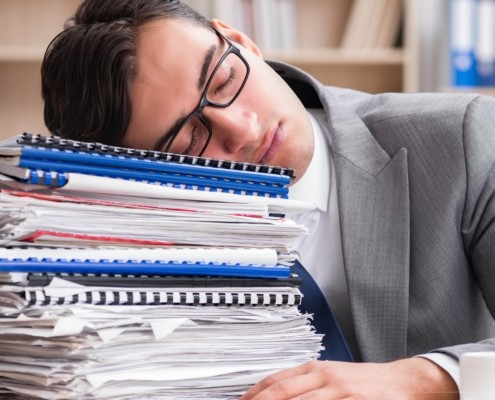 Power napping: why short naps are so good

Everyone naturally has low levels of performance at some point during the day, when we make more mistakes, are less able to concentrate, are more tired, and our body temperature even drops. This tiredness cannot be combated with coffee or a longer night’s sleep – our internal biological clock dictates it.

When this low occurs varies from person to person. For early risers usually between 12 and 2 p.m., for morning grouches a little later.

If you then treat yourself to a short nap, you can recharge your batteries and wake up refreshed and efficient. Sleep researchers confirm that a nap in between is healthy and promotes performance. The short sleep outside of the main nightly sleep phase is also referred to as power napping.

Experts from the University of Athens followed almost 24,000 men and women between the ages of 20 and 86 over six years. Those who allowed themselves half an hour of sleep three times a week reduced their risk of heart attack by 37 percent. The short sleep also strengthens the immune system and helps to lose weight. Because tired people often have an appetite for greasy and sweet foods.

The small breaks also improve the ability to react, concentration and memory, especially short-term memory. That’s according to a study by Harvard Medical School. The US aerospace agency NASA was also able to show that alertness increases by an impressive 100 percent after a nap.

Sleep also increases the concentration of the hormone serotonin in the blood – this lifts the mood and prevents states of exhaustion. In summary, power napping increases performance.

Anyone who has the opportunity to treat themselves to a refreshing mini sleep break in the home office or in the office on site should use it. These tips turn your nap into a power nap:

Just get a short sleep. If you fall into a deep sleep, you wake up feeling limp and tired instead of fresh and awake. The reason: when you sleep for a long time, your blood pressure drops therefore, the afternoon nap should last 10 to a maximum of 30 minutes.

To wake up on time, it is best to set an alarm clock. Alternatively, pick up a bunch of keys or some other object. The reason: Shortly before entering the deep sleep phase, the body relaxes, the bunch of keys falls off and you wake up. Incidentally, this method was already used by Frederick the Great. He regularly slept in a chair during the day, holding an apple in each hand.

Experts recommend having a cup of coffee before power napping. The caffeine only works after 30 minutes and then acts as an internal alarm clock.

Don’t darken the room as this will help you wake up more easily. The best time for the office nap varies from person to person. Most people dip after lunch, between 1pm and 2pm. Then when you rest, the body can focus its energy on digestion. Even if you work at home: The best place for power napping is by no means your bed – it entices you to sleep late. A lounger or recliner is more suitable. You can also put a thin mat on the floor.

If noise bothers you, listening to relaxing music, such as classical music, can help.

For many, falling asleep at the touch of a button is not easy. But you can learn that. For example, through progressive muscle relaxation according to Jacobson, a deep relaxation training. You can also use autogenic training or yoga to train yourself to fall asleep.

Power napping: normal in many countries and cultures

Power napping has many benefits. Nevertheless, many people in the UAE only nap during the day on weekends because anyone who disappears under the desk in between in the office is quickly considered a lethargic lazybones. This social pressure all too often prevents a relaxing short sleep in the office.

Even in the home office, many people do not allow themselves a short break. One’s own demands for performance often stand in the way of a relaxed nod – those who dare often have a bad conscience afterwards.

In the southern countries of Europe such as Italy or Spain, as well as in Asia, things are completely different – here the siesta is part of the normal daily routine. In China and Japan, day sleepers are a common sight on buses and trains, in restaurants over meals, or even in meetings.

It will probably take a while before that happens everywhere in the world. If you currently do not (yet) have the opportunity for a power nap in the office or in your home office, you may at least consider your daily rhythmic performance lows when planning your appointment.

For example, don’t schedule important meetings right after lunch. And just close your eyes for a moment at work and let your thoughts wander – even a minute is relaxing.