Sport instead of social media: Good for the psyche

If you spend 30 minutes less on social media every day and engage in physical activity instead, you do a lot to improve your mental health. This is shown in a study conducted by a team from the Mental Health Research and Treatment Center at Ruhr-Universität Bochum headed by assistant professor Dr. Julia Brailovskaia. Participants who followed this advice for two weeks felt happier, more satisfied, less stressed by the Covid-19 pandemic and less depressed than a control group. These effects lasted even six months after the study had ended. 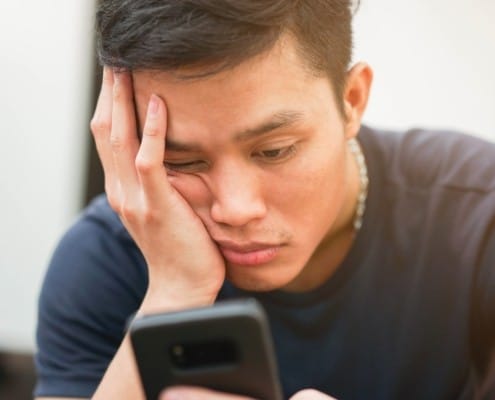 The downside of social media

In times of lockdowns and contact restrictions due to the Covid-19 pandemic, social media channels like Instagram, TikTok, Facebook, Twitter and WhatsApp ensured that we still felt connected to other people. They distracted us from the stress brought about by the pandemic, which caused many people to experience anxiety, insecurities, and hopelessness. But social media consumption has also its drawbacks. Heavy use can lead to addictive behaviour that manifests itself in, for example, a close emotional bond to the social media. In addition, fake news and conspiracy theories can spread uncontrollably on social channels and trigger even more anxiety.

“Given that we don’t know for certain how long the coronavirus crisis will last, we wanted to know how to protect people’s mental health with services that are as free and low-threshold as possible,” explains Julia Brailovskaia. To find out whether the type and duration of social media use can contribute to this, she conducted an experimental study as part of her fellowship at the Center for Advanced Internet Studies (CAIS).

She and her team recruited a total of 642 volunteers, assigning them randomly to one of four groups of roughly equal size. The first group reduced the daily social media consumption by 30 minutes during an intervention period of two weeks. Since previous studies had shown that physical activity can increase well-being and reduce depressive symptoms, the second group increased the duration of physical activity by 30 minutes daily during this period, while continuing to use social media as usual. The third group combined both, reducing social media use and increasing physical activity. A control group didn’t change the behaviour during the intervention phase.

Before, during and up to six months after the two-week intervention phase, the participants responded to online surveys on the duration, intensity and emotional significance of their social media use, physical activity, their satisfaction with life, their subjective feeling of happiness, depressive symptoms, the psychological burden of the Covid-19 pandemic and their cigarette consumption.

Do you find yourself unconsciously opening up Instagram, TikTok, Facebook, or LinkedIn and mindlessly scrolling? Experts have long maintained that like nicotine, alcohol, and narcotics, social media too can be highly addictive. On average, global internet users spend 2 hours and 27 minutes on social media per day, though trends differ widely by country. In many of the markets that Global Web Index surveyed, social media use had shrunk or plateaued in Q1 2020 when compared with 2019 and 2018 figures, but the coronavirus pandemic reversed this trend in many countries.

Emerging markets continue to spend the most time on social networks during a typical day. This could be driven by these markets generally having younger populations, with the 16 to 24-year-old segment driving growth globally. Nigeria spent the most time connected to social networks, devoting more than four hours a day to the digital social sphere. Filipinos typically spent almost as much time per day on social media sites, while Indians and Chinese clocked in around 2.5 hours and 2 hours, respectively, per day.

Countries with aging populations exhibited shorter social media use. During a typical day in Japan, people spend only three quarters of an hour staying connected on social networks. Germany posts only slightly higher numbers, with users going on social media for one hour and twenty minutes every day, while the UK and the U.S. both spent closer to two hours per day engaging with social media.

Like many users worldwide, several studies have shown residents of the United Arab Emirates are also victims of mild to severe social media addiction. A study conducted by a team of students from the Canadian University Dubai showed that around 69.7 per cent of UAE students use social media for five hours or more daily. Anything above two hours is considered addictive, experts have said.

Here are some tips for recovering from social media addiction:

Healthy and happy in the age of digitalisation

The findings clearly showed that both reducing the amount of time spent on social media each day and increasing physical activity have a positive impact on people’s well-being. And particularly the combination of the two interventions increases one’s satisfaction with life and subjective feeling of happiness and reduces depressive symptoms. The effects last for a long time: even six months after the two-week intervention phase had ended, participants in all three intervention groups spent less time on social media than before: namely about a half hour in the groups that had either reduced social media time or increased their daily exercise, and about three-quarters of an hour in the group that had combined both measures. Six months after the intervention, the combination group engaged one hour and 39 minutes more each week in physical activity than before the experiment. The positive influence on mental health continued throughout the entire follow-up period.

“This shows us how vital it is to reduce our availability online from time to time and to go back to our human roots,” concludes Julia Brailovskaia. “These measures can be easily implemented into one’s everyday life and they’re completely free — and, at the same time, they help us to stay happy and healthy in the digital age.”