Coronavirus vaccines: do they also work with mutations?

As the Coronavirus mutates, the chance of its survival increases which also increases concern that the new vaccines may no longer work. Experts however are so far optimistic.

Fears that coronavirus vaccines will no longer help with new virus variants is understandable as part of the Sars-CoV-2 genome provides the template for the recently approved vaccines, the blueprint for the spike protein on the Virus surface. If this genetic blueprint changes, the structure of this protein also changes. The vaccination against Covid-19 may then no longer work.

So far however the genetic changes observed with the new Corona variants only affect a very small part of the spike protein. Experts therefore agree that existing vaccines will work against known mutations. Initial studies also confirm this. 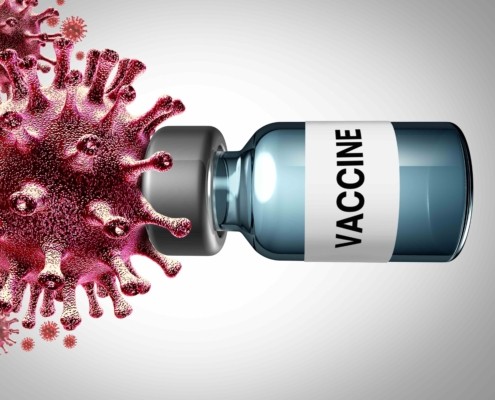 Do vaccines work against the new corona variants?

The virus variants in UK and South Africa share a common characteristic – the so-called N501Y mutation. This mutation affects the same spike protein that enables the virus to enter the human cell. Experts believe this mutation makes the virus more contagious.

A study by the University of Texas in cooperation with the manufacturer Pfizer examined whether this special N501Y mutation in the spike protein has an influence on the effectiveness of the BioNTech / Pfizer vaccine BNT162b2.

Good news. According to the study, the mRNA vaccine from the manufacturer BioNTech / Pfizer continues to protect. The antibodies formed by 20 vaccinated study participants were also able to successfully ward off the new virus mutants. However, the examined group of test persons with 20 subjects was quite small. In addition, the investigation took place under laboratory conditions.

Nevertheless, experts are sure that the BioNTech vaccine works just as well against the new variants as against the Sars-CoV-2 viruses that have been known for a long time. The mRNA vaccine from the manufacturer Moderna is also said to remain as effective as it is based on the same mRNA principle of action.

Why is the vaccination still working?

The reason for the positive expert assessment lies in the effects of the newly identified mutations – because they are only minor. The spike protein, a large protein molecule, plays a key role in this. It sits on the virus surface and offers a direct point of attack for the immune system.

Experts call such structures epitopes. The human immune system is trained by the vaccination to recognize such epitopes. This is also the case with the new corona vaccines: They contain the blueprint for the spike protein, i.e. a specific epitope on Sars-CoV-2. With the help of the blueprint, the body cells produce the spike protein themselves after the vaccination and thus provide the stimulus for the immune system to become active.

As a result, this forms a range of antibodies that can bind the spike protein in many different places. Special defence cells also develop, which are also directed against this protein structure. The goal: If “real” coronaviruses penetrate, the trained immune system can react immediately and prevent illness.

Individual mutations change the external shape of the virus only slightly

How exactly the spike protein looks is determined by a certain section in the Sars-CoV-2 genome. Changes in this section, called mutations, can therefore change the appearance of the protein. However, such mutations only take place in very small steps – the external shape of the spike protein remains largely the same.

According to the current expert opinion, this means that the individual contribution of a mutation to the immune response is rather small: although some “antibody binding sites” are no longer available, the vast majority of the antibodies that are formed are still able to identify the spike protein and successfully fend off attack. In this way, the immune system – after a vaccination – also recognizes the changed virus particle by its external shape.

How much longer will the vaccination work?

The coronavirus changes gradually – with every infection of a person new small changes can be added. Further mutations, and thus more and more new Corona variants, will also occur in the future.

However, it takes a certain amount of time until the sum of all mutations (point mutations) has a decisive influence on the external shape of the spike protein, for example. It can be assumed that the coronavirus epitope will actually change over the course of the pandemic, reducing the effectiveness of the new vaccines over time. This phenomenon can be observed, for example, with the influenza viruses, the causative agents of the flu. Due to the rapid changes in the virus, a new vaccination is necessary every year.

When can escape mutations be expected?

Scientists call the underlying processes in such a case escape mutation: The virus evolves to evade the defence of the human immune system.

How long such a process takes, however, depends on many factors – the most important is: The more cases of infection occur worldwide, the faster and more often the process of change of the coronavirus takes place. In the current phase of the pandemic, the virus can, in all probability, be controlled by vaccinations. However, further mutations can have a lasting effect on the effectiveness.

Even in the case of increased mutations, scientists give hope: Thanks to advances in vaccine research, they can quickly identify genetic changes and adapt the vaccine accordingly. The new mRNA vaccines in particular can also be produced more quickly than conventional live and dead vaccines. This means that an adapted vaccination would also be available quickly.

The team behind the AstraZeneca (Oxford) vaccine are already working on a new and potentially more effective vaccine to tackle the latest Brazilian Variant. Moreover with new productions facilities and production lines being built in record time it looks like the pharmaceutical industry is quickly getting stronger and better prepared to respond to future mutations which as this stage seem highly probable.

The world is battling new mutant strains of Covid-19 that are wreaking havoc on embattled healthcare systems. Governments have imposed fresh lockdowns and introduced travel bans to deal with the variants first detected in Brazil, South Africa and the UK.

These variants have particular mutations – changes to the virus’s genetic material – that affect the virus’s spike protein, the structure that allows the pathogen to attach to and enter human cells. Although it spreads more easily, this variant reportedly does not make people more ill and despite concerns to the contrary, research has shown that even with N501Y the virus is still susceptible to vaccines.

National Emergency Crisis and Disaster Management Authority (NCEMA) in the UAE reiterated the importance of getting vaccinated in their latest briefing. Authorities said the vaccine is the only way to control and combat the severity and spread of the diseases, given the new mutations of the virus and expected effects.

The general consensus is that even if the various available vaccines cannot 100% protect everyone or prevent people carrying and spreading the virus, they do at least reduce the severity of infection for all and that is a remarkable achievement for science in such a short time.